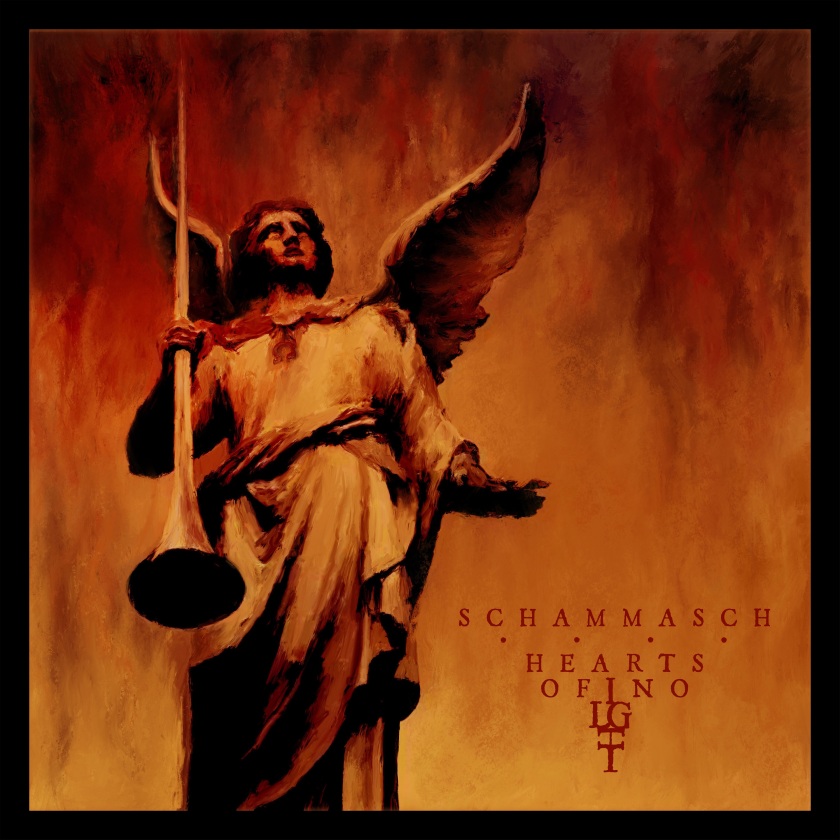 I really do. Ambition will take you a long way, as far as I am concerned. Even if that ambition doesn’t pay off, I appreciate when someone puts it out there and goes for it.

Case in point, Schammasch and their 2016 release Triangle. Talk about ambition. Triangle is essentially 3 albums in one, with a different take on music on each of the three albums. I was instantly intrigued and fascinated by the ambition. And while it does make the album a tad on the long side, it is still a staggering work of art and well worth the exploration.

Triangle put Schammasch on my radar. And 2019 sees them releasing Hearts of No Light, and this record has Schammasch on the short list of most interesting and fascinating bands releasing music currently.

This is black metal at its heart. There are harsh vocals, though not in the usual high, harsh register classic for black metal, but certainly not the low growls of death metal. The other hallmarks are there. Some rapid, tremolo picking, blast beats, and double bass.

What really sets Schammasch apart is their mastery of atmosphere. While this is clearly a metal album, so much of that is balanced by atmosphere. Take first track, “Winds That Pierce the Silence”. After a short piano intro, we get a guitar and drum slowly building for the next three minutes. I love that they are willing to let the song take some time, to really breathe. The sound is somewhat sinister, as the layers gradually come in, finally building to the metal crescendo that is the following track, “Ego Sum Omega”. The flow from the first track to the second is masterful, and the tension created has the listener so ready for the heaviness that this track brings.

Thus it is throughout the album. There is a very post-metal sensibility in the dynamics of Hearts of No Light, with crescendos and denouements throughout. The builds and then the releases come often enough to keep the music fascinating, but not so often that it feels they are forced.

The music has an intensely organic feel to it. It seems to really flow from the band, and subsequently flow across the listener. Vocals are almost chants at times, adding to the powerful atmosphere. Tracks like “Qadmon’s Heir” flow directly into “Rays Like Razors”, two of the strongest tracks on the album. “A Paradigm of Beauty” has an almost Joy Division feel to it, less metal, almost bordering on a pop song. It expertly sets up “Katabasis”, which may be my very favorite song on the album. Here we have another gradual build of just over 3 minutes, that culminates in an incredibly powerful track that elevates Hearts of No Light above many of its contemporaries. Final track, the lengthy and lethargic “Innermost, Lowermost Abyss” is 15 minutes of atmosphere. It may feel long at times, but after the amazing previous tracks, it is an excellent coda to the album.

Schammasch is one of those bands you need to experience. This isn’t an immediate album. I started listening to it digitally, and thought it was a good album. After about 4-5 listens, it went from good to great, and subsequent listens have elevated it to amazing, and I had to order the vinyl. This is easily one of my favorites of 2019, and there have been some incredible albums released this year.